One of my favourite experiences in Thailand so far has been sport days! Sport Day is an all-day celebration of school spirit and talent that all Thai schools have at least once annually. It is completely run by the students, who compete, manage events, do first aid, and more. Preparation takes months in advance and there are meetings throughout the year about it. There are various competitions within the school against other colours. Each class (about fifty students) is assigned a colour and the colour teams are composed of all of the grade levels, or Matthayoms. My class, 5/8, was team green. My school has one each semester for three days each so they divided the competitions between the two times.

On my first sport day, August 23rd, 2018, there was an emphasis on athletic talent. There were tournaments for football, futsal, basketball, table tennis, volleyball, and more. I was really pleased to watch my friends play various sports throughout the weekend. Kru Nok encouraged me to participate in an event and I had signed up to play football for the girls’ green team. I didn’t think about it too much until the day I received my jersey, when I realized I hadn’t played football in years. I was both terrified of reliving the humiliation of my middle school P.E. days but excited to play football again.

The field was huge and there was a tent set up in the corner for my team to sit and watch under. My best friends weren’t playing as they were going to dance in halftimes, but they and my advisor came to cheer me on. As my team was lining up to play, my host dad– an avid football fan– arrived to watch me play. He took lots of photos and was happily chatting with my team until we started. I felt really supported.

I knew about three or four girls that I’m friends with from class on the team, which made me feel a bit relieved. The game was pretty short, only about forty-five minutes. I started off on defense with my friends and I was playing a lot better than I had anticipated. As the game went on, I felt more confident and started having a ton of fun. When we scored our first goal, a girl on my team that I had never met before and I yelled in victory and gave each other a big hug. In half-time, a ton of people rushed to my side with water or asking if I needed anything. I found out the cause for concern was just my very red face, frequently compared to a tomato, which I found hilarious. 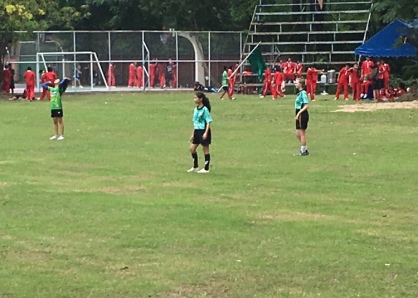 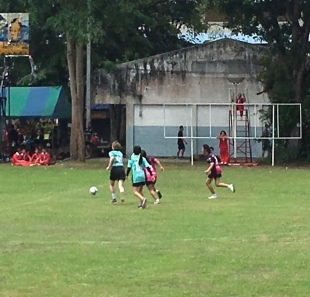 For the second half, I played offense and it was exhilarating. I was really proud that I tried my best and played for the entire game. We ended in a tie and we unfortunately lost our shoot-out. Some of my team was disappointed we had lost early in the tournament and some even told me they felt like they let me down on my only sport day. However, I didn’t view it as a loss at all. After all the high-fives, hugs, and compliments we gave each other throughout the game, the camaraderie between us was off the charts. I was so happy to have the chance to forget about my daily stress and my fears of humiliation or making cultural mistakes and just play a familiar game with girls who I could now call my friends. I couldn’t ask for more than to be a part of their team.

My second sport day, November 16, 2018, was more focused on school spirit. I didn’t compete as the only event I could do was running. I had been advised from alumni not to, considering the heat leads to students being carried out on stretchers every year. Instead, I was a part of the Sport Day Parade, our only one of the year.

I walked with the pink team (Kru Nok’s team) instead of my own. The pink team’s theme was “Pinkland’, like “Candyland”. I dressed in a pink shirt, a beige skirt, and white tights with a lollypop prop. It was fun despite the celebration being very long and the weather being especially hot. Afterwards, I watched my best friends’ cheer competitions, which is extremely different from cheer in America.

Here, cheer teams consist of about eight or more older kids who dance in front of their teams’ bleachers. The bleachers have been painted and decorated to their colour’s chosen theme. The younger kids, in Matthayoms 1-3,  memorized and practiced sitting down cheers for months in advance. They were perfectly synchronized and use colours, shapes, and sounds. It is tradition for the older kids to coach the younger kids on their team after school so I had already seen them practice before. Nevertheless, it is like nothing I’d ever seen and I was absolutely mesmerized every time I watched it.

After lunch, I sat by some other friends in my class and watched the races. I was really happy to get to know one of the girls in my class who had always been very friendly to me. After a few hours, the heat made me cave and I walked home early to take a long nap after such a busy day!

All of my classmates’ hard work definitely paid off as the event couldn’t have been more fun. I loved being surrounded by school spirit and it was one of the first times I truly felt at home in Thailand.

This site uses Akismet to reduce spam. Learn how your comment data is processed.